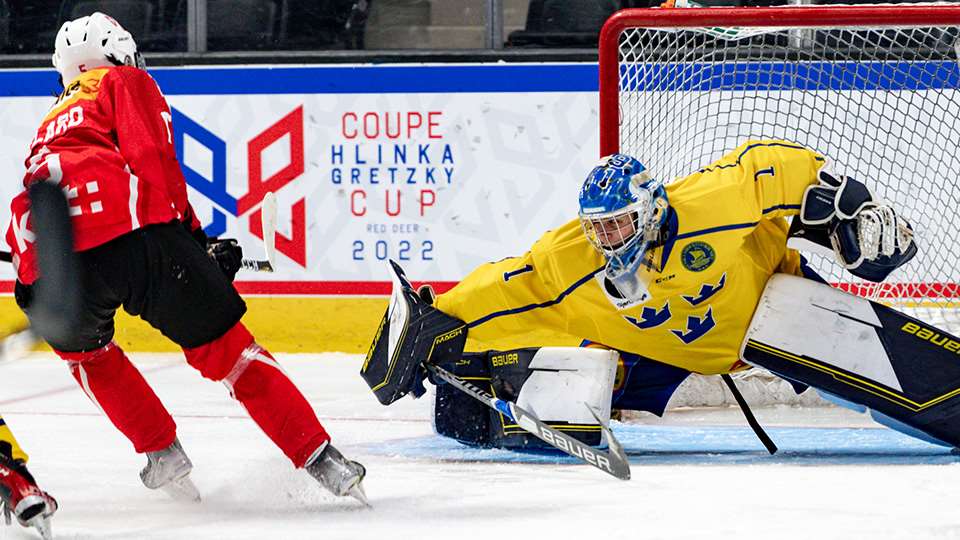 RED DEER, Alta. – Sweden was a perfect 4-for-4 on the power play and Theo Lindstein had a goal and four assists to help Sweden to its second preliminary win at the Hlinka Gretzky Cup, 9-3 over Switzerland on Tuesday.

Noel Nordh opened the scoring on an early man advantage and Lucas Kling followed up with another to give the Swedes a 2-0 lead just over five minutes into the game. Nordh followed up with his second of the night, but Simon Meier stole one back for the Swiss off a nice touch pass from defenceman Tim Horak to cut the deficit to two heading into the second period.

Sweden made the most of the power play in the second frame, adding two more markers from Otto Stenberg and Lucas Sagranden. A goal from Léo Braillard gave the Swiss life, but was balanced out by an even-strength goal from Willie Johansson that gave the Swedes a 6-2 lead heading into the final frame.

Braillard scored a second goal early in the third, but the Swedes controlled possession for most of the period, beating Swiss goaltender Diego Simeoni three more times.

Despite the heavy-handed loss, Simeoni had multiple highlight reel stops and finished the game with 31 saves. Noah Erliden made 16 saves on 19 shots faced.

Switzerland will be back in action on Wednesday afternoon against Slovakia (3 p.m. MT), while Sweden will take on Canada in the finale of the preliminary round on Wednesday evening (7 p.m. MT).